The DC-4 had a notable innovation in that its nose wheel landing gear allowed it to incorporate a fuselage of constant cross-section for most of its length. This lent itself to easy stretching into the later DC-6 and DC-7. A total of 1,163 C-54/R5Ds were built for the United States military services between 1942 and January 1946.

Douglas continued to develop the type during the war in preparation for a return to airline services when peace returned. However, the type’s sales prospects were hit by the offloading of 500 wartime C-54s and R5Ds onto the civil market. DC-4s were a favorite of “startup” airlines (AKA non-scheduled or supplemental carriers) such as Great Lakes Airlines, North American Airlines, Universal Airlines, Transocean Airlines, etc. In the 1950s, Transocean Airlines (Oakland, California) was the largest operator of the DC-4.

Douglas produced just 79 new-build DC-4s before production ceased on August 9, 1947. Pressurization was available as an option, but all civilian DC-4s (and C-54s) were built unpressurized.

The DC-4/C-54 proved a popular and reliable type and several remain in service today, particularly in the USA, where it proved popular as a charter/freight plane. An example is Brooks Fuel of Fairbanks, Alaska, with several DC-4/C-54s still operational in 2007 on cargo/tanker flights to remote airstrips. The DC-4 is still in operation in the Canadian North with Buffalo Airways. 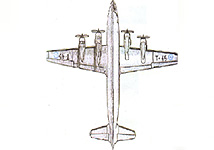 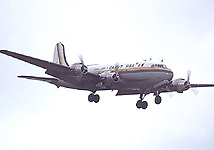 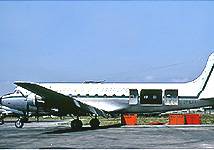