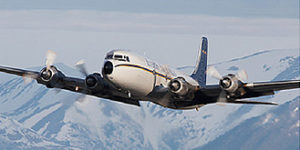 Douglas designed four basic variants of the DC-6: the “basic DC-6,” and the longer fuselage, higher-gross-weight, longer range versions—the “DC-6A” with large cargo doors forward and aft of the wing on the port (left hand side) with a cargo floor, the “DC-6B” designed for passenger work, had passengers doors only and a lighter floor and the “DC-6C” a “convertible” aircraft built with the 2 cargo doors, but fitted with removable passenger seats. The military version, essentially similar to the DC-6A, was the USAF C-118 Liftmaster, and the USN R6D. The DC-6B, powered by Pratt & Whitney R-2800-CB-17 engines with Hamilton Standard 43E60 constant speed reversing propellers, was regarded as the ultimate piston-engine airliner from the standpoint of ruggedness, reliability, economical operation and handling qualities.

The USAF and USN renewed their interest in the DC-6 during the Korean War, and ordered a total of 167 C-118/R6D aircraft, some of which later found their way into civilian service. Harry Truman’s first presidential aircraft was an Air Force VC-118 called The Independence.

Total production of the DC-6 Series was 702 including military versions.

In the 1960s, two DC-6s were used as transmitter platforms for educational television, based at Purdue University, in a program called MPATI (Midwest Program for Airborne Television Instruction).

Many older DC-6 aircraft were replaced in airline passenger service by the Douglas DC-7, but the simpler, more economic engines in the DC-6 has meant that this type has out-lived the more sophisticated DC-7. DC-6/7s surviving into the Jet Age were replaced in front line service by Boeing 707. 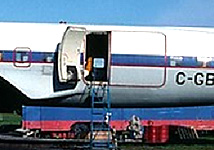 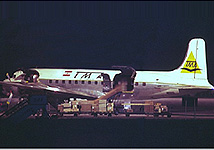 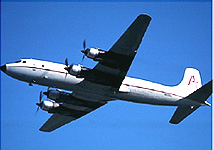