The Beechcraft Model 99 is a civilian aircraft produced by the Beech Aircraft Corporation (previously the Beechcraft Division of Raytheon and now a unit of Hawker Beechcraft). It is also known as the Beech 99 Airliner and the Commuter 99. The 99 is a twin-engined, unpressurized, 17-seat/15 passenger turboprop aircraft, derived from earlier Beechcraft King Air and Queen Air, using the wings of the Queen Air, and the engines and nacelles of the King Air, and sub-systems from both, and with a unique nose structure used only on the 99.

Designed in the 1960s as a replacement for the Beechcraft Model 18 its first flight was in July 1966. It received type certification on May 2, 1968, and sixty-two aircraft were delivered by the end of the year.

Production ended in 1986. Nearly half the Beech 99s in airline service are now operated as freighters by Ameriflight. 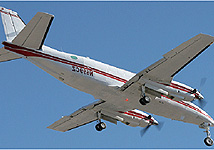