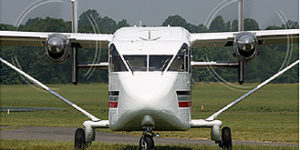 The Skyvan is a 19-seater twin turboprop aircraft manufactured by Short Brothers of Belfast, Ireland. It is used mainly for short-haul freight and skydiving.

The Skyvan is a high wing twin engine all-metal monoplane with a high cantilever tail plane with twin rudders. The first flight of the Skyvan, the Skyvan 1, was on 17 January 1963.

The Shorts 330 and Shorts 360 are stretched model of the original SC-7 which were designed as regional airliners.

Construction started at Sydenham, Belfast in 1960 and the first flight of the prototype occurred on 17 January 1963, powered by two Continental piston engines. The prototype was re-engine with the intended Turbomeca Astazou turboprop engines later in 1963. The Skyvan is an all-metal, high wing monoplane, with a braced, high aspect ratio wing (similar to that used on Hurel-Dubois aircraft), and an unpressurised, square section fuselage. Production switched in 1968 to the Skyvan Series 3 aircraft, which replaced the Astazous with Garrett TPE331 turboprops. A total of 153 Skyvans (plus the prototype) were produced by the time production ended in 1986 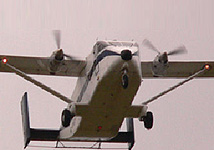 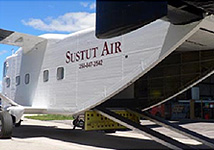 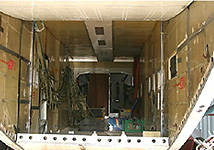