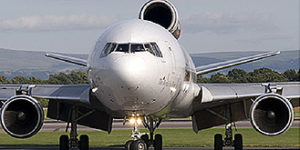 The first MD-11 was delivered to Finnair on December 7, 1990 and accomplished the first revenue service by an MD-11 on December 20, 1990, when the aircraft carried passengers from Helsinki to Tenerife in the Canary Islands. First MD-11 service in the U.S. was inaugurated by Delta Air Lines, also in 1990. It was during this period that flaws in the MD-11′s performance began to become apparent. It failed to meet its targets for range and fuel burn. American Airlines in particular was unimpressed, as was Singapore Airlines, which canceled its order for 20 aircraft. The former cited problems with the performance of the airframe and the Pratt & Whitney PW4000 engines selected for its use as reasons of the cancellation while the latter said that the MD-11 cannot fulfill the airline’s long haul routes.[4] The figures revealed exclusively to Flight International show that, based on pre-flight estimates, the P&W-powered MD-11 should have been capable of a 7,000 nautical miles (12,950 km) range with 61,000 pounds (27,680 kg) of payload. Even with the Phase 1 drag reduction in place then, the aircraft could only achieve its full range with 48,500 lb (22,000 kg) of payload, or a reduced range of 6,493 nm (12,025 km) with a full payload.

In 1990, McDonnell Douglas with Pratt & Whitney and General Electric began a modification program known as the Performance Improvement Program (PIP) to improve the aircraft’s weight, fuel capacity, engine performance, and aerodynamics. McDonnell Douglas worked with NASA’s Langley Research Center to study aerodynamic improvements. The PIP lasted to 1995 and recovered the range for the aircraft. However, the damage was already done.

The MD-11 was one of the first commercial designs to employ a computer-assisted pitch stability augmentation system that featured a fuel ballast tank in the tail plane, and a partly computer-driven horizontal stabilizer. Updates to the software package have achieved a situation where the plane’s handling characteristics in manual flight are comparable to the DC-10, despite a much greater fuel efficiency achieved by the lessened drag of the smaller tail plane.

After McDonnell Douglas merged with Boeing in 1997, the new company announced that MD-11 production would continue, as a freighter. However, in 1998 Boeing announced it would end MD-11 production after filling current orders. The last two MD-11s were manufactured during June and September 2000, and delivered to Lufthansa Cargo on February 22 and January 21, 2001 respectively. Production ended because of lack of sales, due to internal competition from comparable aircraft, such as the Boeing 777 and external competition from the Airbus A330/A340. Also, two engines are generally less expensive to operate and maintain than three. Since there was a large demand for cargo aircraft and because there was no 777 cargo version available at the time, many airlines using the MD-11 were anxious to switch to the 777 as they had no problems selling their used MD-11s to cargo operators. 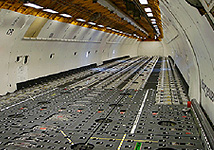 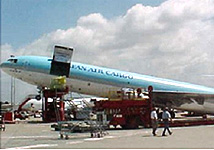 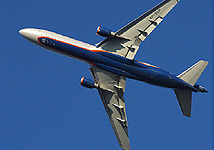