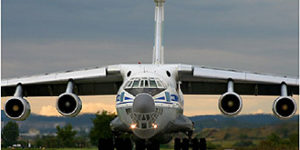 The Ilyushin Il-76 is a 4-engined strategic airlifter designed in the Soviet Union and in widespread use in Europe, Asia and Africa. Originally built for the military, the plane has subsequently seen extensive service as a commercial freighter, especially for the delivery of outsized or very heavy cargo. A water-carrying version of the plane has proven effective in fire-fighting operations in many countries. The Il-76 reportedly carries some 90% of ramp-delivered European airfreight and 90% of disaster relief aid worldwide. It is the most widely used dedicated jet freighter in the 40+ t. category.

The aircraft was first conceived by Ilyushin in 1967 to meet a requirement for a freighter able to carry a payload of 40 tons (88,000 lb) over a range of 5,000 km (2,700 nautical miles; 3,100 statute miles) in less than six hours, able to operate from short and unprepared airstrips, and capable of coping with the worst weather conditions likely to be experienced in Siberia and the Soviet Union’s Arctic regions. The Il-76′s original design was influenced (at least in part) by the development of the US Lockheed C-141 Starlifter. Differences in design included an observation/navigation glazed nose, heavy duty landing gear, more powerful engines, slightly larger cargo hold and a defensive tail gun (military versions). It first flew on March 25, 1971. 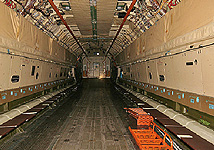 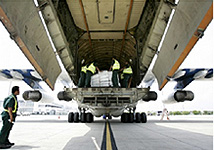 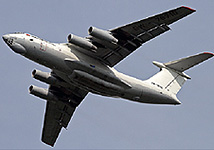