Antonov An-225 Available For Cargo Charter 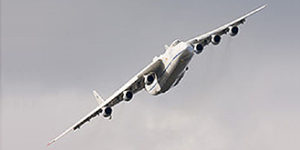 The An-225 Mriya (Russian: Антонов Ан-225 Мрия, Ukrainian: Антонов Ан-225 Мрія, NATO reporting name: Cossack) is a strategic airlift transport aircraft which was built by the Antonov Design Bureau, and is by some measures the largest airplane ever built. The design, built to transport the Buran orbiter, was an enlargement of the successful An-124 Ruslan. Mriya (Мрія) means “Dream” (Inspiration) in Ukrainian.

The Antonov An-225 is commercially available for flying any over-sized payload due to the unique size of its cargo deck. Currently there is only one aircraft operating but a second mothballed airframe is being reconditioned and is scheduled for completion around 2010. (Airliner World January 2009)

The An-225 is an extension of Antonov’s earlier An-124. To meet the needs of its new role, fuselage barrel extensions were added fore and aft of the wings, which received root extensions. Two more Ivchenko Progress D-18T turbofan engines were added to the new wing roots, bringing the total to six, and an increased-capacity landing gear system with 32 wheels was designed. The An-124’s rear cargo door and ramp were removed to save weight, and the empennage was changed from a single vertical stabilizer to a twin tail with an oversized horizontal stabilizer. The twin tail was made necessary by the requirement to carry very large and heavy external loads, which would disturb the aerodynamics of a conventional tail. Unlike the An-124, the An-225 was not intended for tactical airlifting and is not designed for short-field operation.

With a maximum gross weight of 640 tonnes (1,411,000 lb), the An-225 is the world’s heaviest and largest aircraft. The Hughes H-4 Hercules, known to most as the “Spruce Goose,” had a greater wingspan and a greater overall height, but was considerably shorter, and due to the materials used in its construction, also lighter. In addition, the Hercules only flew once and never climbed above 21.3 m (70 ft), making the An-225 the largest aircraft in the world to take off multiple times. The An-225 is also larger than the Airbus A380 airliner, and considerably bigger than the Antonov An-124, Boeing 747 Large Cargo Freighter, and Lockheed C-5 Galaxy, the nearest equivalent heavy airlifters. 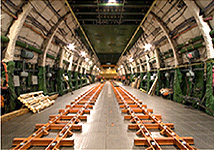 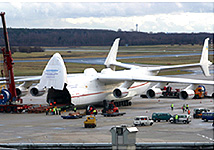