Antonov An-124 Available For Cargo Charter 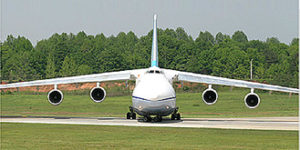 The An-124 was manufactured in parallel by two plants: the Russian company Aviastar-SP (ex. Ulyanovsk Aviation Industrial Complex) and by the Kyiv Aviation Plant AVIANT, in Ukraine. Series production ceased with the breakup of the Soviet Union. The last five unfinished airframes left from the Soviet times were completed in 2001 (1), 2002 (1), and 2004 (3). While currently no An-124 are being produced, Russia and Ukraine have agreed to resume the production in the Q3 2008.

Physically, the An-124 is similar to the American Lockheed C-5 Galaxy, but has a 25% larger payload, and in lieu of the Galaxy’s T-tail, the An-124 utilizes a conventional empennage, similar in design to that of the Boeing 747. An-124s have been used to carry locomotives, yachts, aircraft fuselages, and a variety of other oversized cargoes. The An-124 is able to kneel to allow easier front loading. Up to 150 tons of cargo can be carried in a military An-124: it can also carry 88 passengers in an upper deck behind the wing centre section. However, due to limited pressurization in the main cargo compartment (3.57 PSI), it seldom carries paratroopers.

Since the type was initially designed for only occasional military use, original An-124s were built with a projected service life of 7,500 flight hours with possibility for extension. However many airframes have flown more than 15,000 flight hours. In response to complaints by commercial users, that aircraft built after 2000 (the An-124-100) have an improved service life of 24,000 hours, older airframes are being upgraded to this standard. The works on its extension up to 40,000 flight hours are being performed. The Kyiv Aviation Plant AVIANT offers upgrades to the АN-124-100М-150 version. 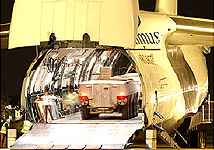 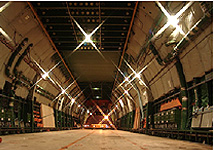 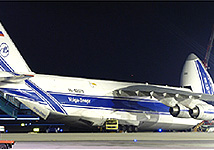